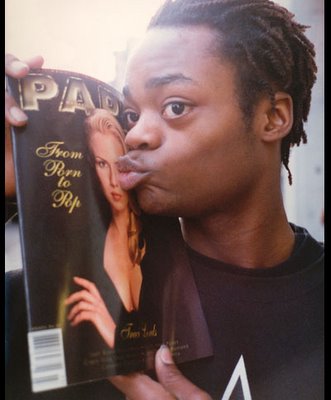 This is one for all to know. These are actual facts and 100% true. The importance of which is only now evident. New York City - February, 1997. It was tradeshow time and everyone at Zoo York (the good old Zoo York) were flying out to LA for the ASR show. Harold, Peter Bici, and myself all got booked on the red eye to LA together. Just us three. We all took a cab to JFK, amped to be heading out West to some warm weather. It was late, and the airport was deserted. I remember Harold skateboarding slowly through the empty terminal ahead of us. When we got to our gate, there were only a few people sitting about the large, dark, room. It was going to be an empty flight. Peter, Harold, and I sat down to wait for the flight to board when we noticed three big Hood looking dudes sitting across from us. They looked like a trio of thugs except for their extravagant jewelry. Then we realized who we were looking at. The big thug in the middle was none other than The Notorious B.I.G. - Biggie Smalls himself! No lie. He had a walking cane and looked a little messed up from his recent car accident, but his presence was felt by all three of us. We didn't say what's up or anything, being the New Yorkers we are we didn't want to intrude on the great one, we just checked him out and got psyched that we were flying on the same plane. Then, while we were waiting, Harold hopped up and began to skate around the empty terminal. As the Airline called us all to start boarding, I looked up to see Biggie and his boys watching Harold skate around. Being in First Class, Biggie got to board ahead of all of us. I watched him stand up, his eyes on Harold, and say 'Hey! You're that skateboard niggga. From that Kids movie.' Harold smiled and rolled up to Biggie. They talked a little bit and Biggie told Harold he was a fan. He told Harold he was proud of what Harold was doing and to keep doing his thing. Peter and I watched with big smiles on our faces. Harold pointed us out and we all said what's up to each other. Biggie gave Harold a pound and then got on the plane with his boys. That was the last time Biggie Smalls stood alive on New York soil. Shaking hands and getting to know Harold. A few weeks later he would be killed in Los Angeles. None of us knew that when we met him at the Airport. We walked by him as we boarded the plane and he said what's up to us again. I remember he had his own seat, the lone first seat in First Class, like a kings throne at the front of the plane. We sat in the back of the empty plane, psyched to be heading to Cali with Biggie Smalls leading the way up front. When we landed, Biggie was already gone by the time we walked all the way out through First Class. I looked at his lone single seater, and laying there was a fine cotton handkerchief. Biggie had used it and left it behind as trash. As a joke I picked it up and took it with me. Peter thought it was disgusting. I took someone's used handkerchief. Funny I thought. A few minutes later we ran into the rest of the Zoo team walking through the LAX airport. At the time, one of our skaters, Vinny Ponte, was a huge Biggie Smalls fan. Harold told him what happened and he was so bummed that he didn't take our flight. As a consolation prize I gave Vinny Biggies old handkerchief. I hope he still has that fucking thing. Now, Biggie and Harold are both gone. But they're also both together. That was Biggie fucking Smalls who reached out to Harold fucking Hunter. That says a lot about how Harold effected people. This page and all these people from all over the world say a lot about how Harold effected people. He effected me. But I'm one of the lucky ones. I've been all over the world with this lunatic and have known him more than most. So the least I can do is share some of that with you. Say what's up to Biggie for me, Harold. Now you guys can sit down and talk for a while longer.
Email ThisBlogThis!Share to TwitterShare to FacebookShare to Pinterest
Labels: chepesent, costa rica, futbol, skateboarding
Newer Post Older Post Home